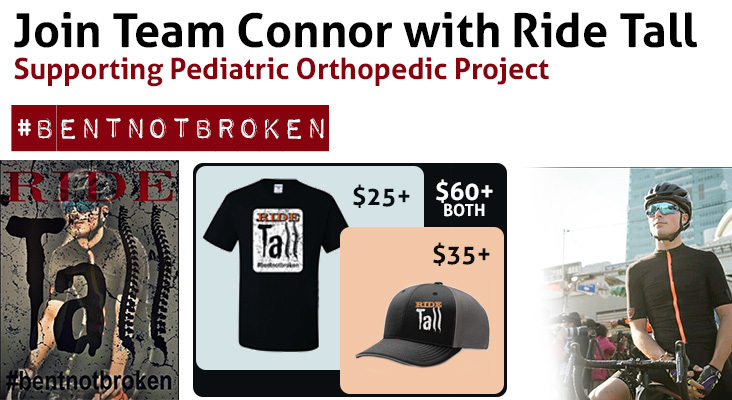 Connor Brown is a Professional Cyclist and has the privilege of traveling the world racing his bike. As a professional athlete, Connor feels that he has a responsibility to make a difference in kids lives using the platform professional sports provides him.

Connors personal battle is to help kids around the world with scoliosis by raising awareness of this debilitating disease as well as raising funds for the Pediatric Orthopedic Project (POP) so that children can get the surgeries they need and ultimately find a cure for Scoliosis.

Join Connor’s team at Ride Tall and you too can help with the cause. #BENTNOTBROKEN

Connor knows how scoliosis can change a child’s life first hand. Connor’s cousin John who is now 9 years old was born with Scoliosis. Although John is an incredible little athlete, John has been unable to live like a normal kid. John has endured surgeries twice a year for several years now and will continue to do so for years to come. Without surgery, John’s curvature would have eventually caused too much pressure on his organs and ultimately would have taken his life.

Sadly, there are many children in the U.S, the Dominican Republic, as well as the rest of the world who need this life saving surgery. Unfortunately, with the price of healthcare so high this surgery is often times unavailable for children around the world.

Connor is driven to see Scoliosis come to an end and with your help, every dollar raised goes to the Pediatric Orthopedic Project so they can heal more impoverished children with scoliosis in the third world and countless more children will soon be riding a bike and acting more like a normal child soon.

About the Pediatric Orthopedic Project (POP)

POP is a non-profit organization dedicated to improving pediatric orthopedic care in the developing world through surgical mission trips, the education of local medical staff, and hospital facility improvements.

To date, because of the Pediatric Orthopedic Projects efforts, a total of 217 impoverished children have received corrective surgeries for scoliosis; 56 through POP’s 7 mission trips, 158 by the Dominican surgeons POP has trained and 3 have been brought to St. Louis, MO. and operated on due to their complexity.

POP has also operated on an additional 11 children with various other orthopedic conditions and brought 2 additional children to the US for treatment (one for physical therapy after a gunshot wound and the other for surgery of the legs for cerebral palsy). Lastly, for the past 3 years, POP has sponsored 4 children with orthopedic conditions in the DR. That is 234 patients in total!

As you can see, Connor along with POP can make a huge difference in children’s lives around the globe. However, they need your help!

Join Connor’s team at Ride Tall and you too can help with the cause. #BENTNOTBROKEN

Every dollar raised goes to the Pediatric Orthopedic Project so they can heal more impoverished children with scoliosis in the third world.